Please stay connected to us through social media (Facebook/Instagram) to see our latest information, including online classes and concerts supporting independent music projects lead by artists of color.

SRBCC has implemented a policy requiring vaccination or proof of a negative COVID test within 72 hours for all public, staff and artists attending events at our space. Please be ready to show proof of vaccination or negative test result when asked by a staff person.
OCTOBER 2021 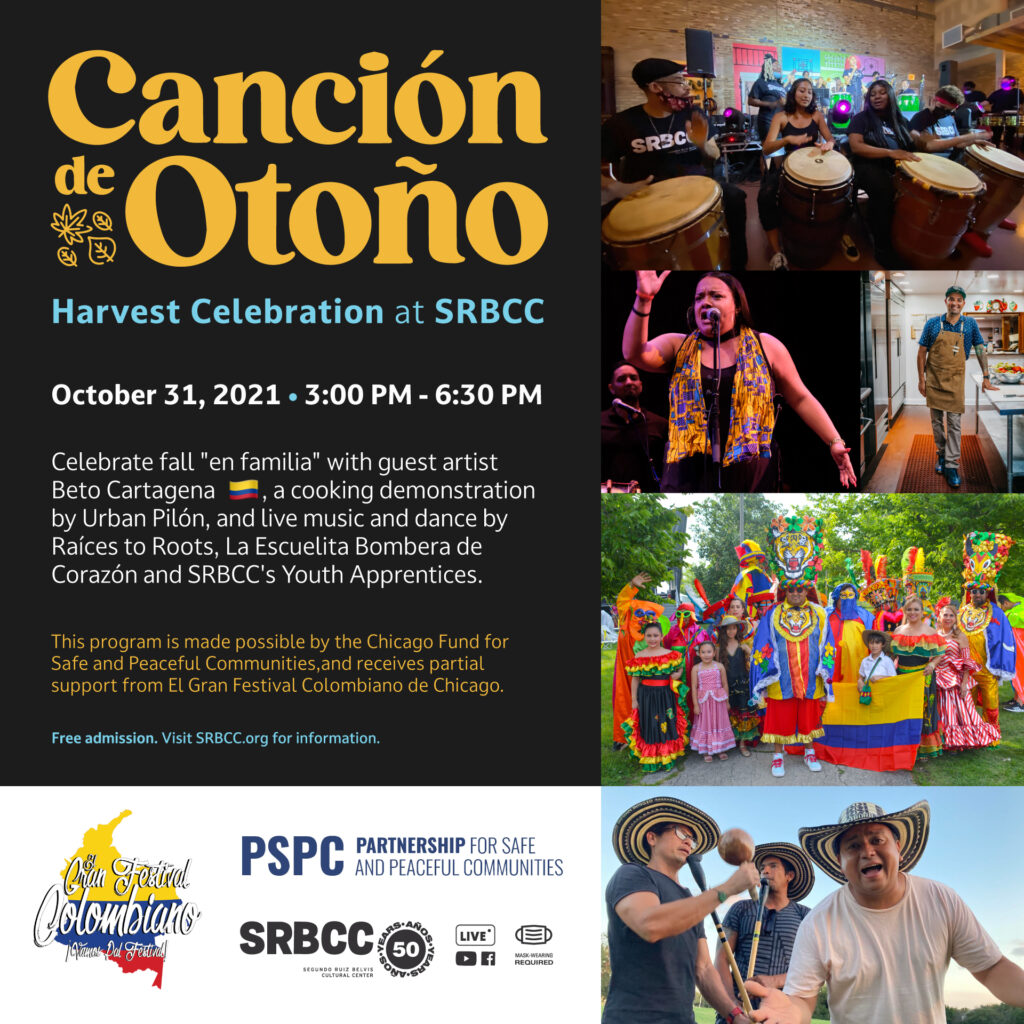 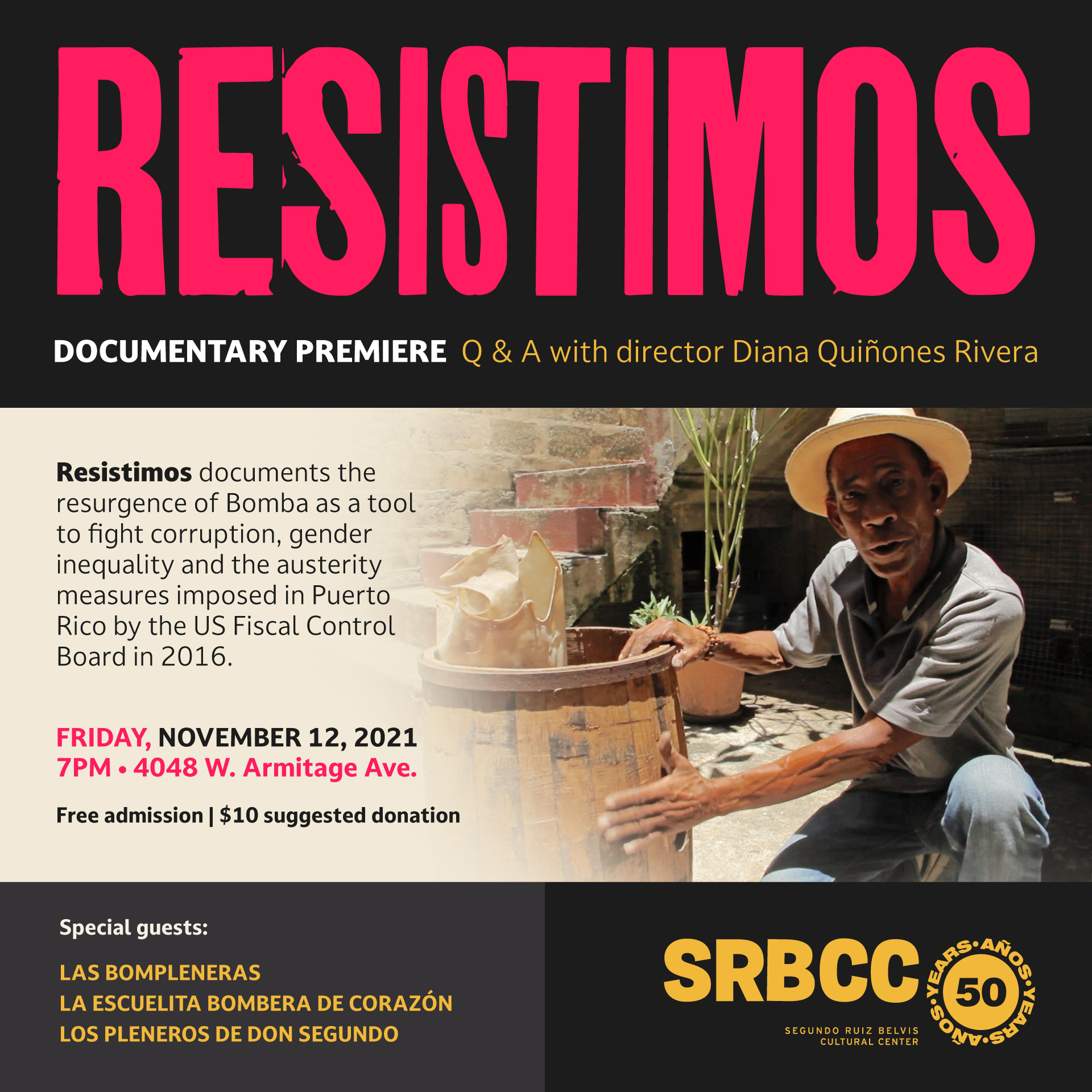 In keeping with their commitment to preserve and promote the arts, Segundo Ruiz Belvis Cultural Center (SRBCC) announced the launch of Abrazo Virtual, a new series of live shows produced and streamed from their home in Hermosa, Chicago (4048 W. Armitage). The concerts stream free of charge through the Center’s Facebook (Facebook.com/SRBCC) and YouTube accounts (@SRBCC). VIEW ALL EPISODES HERE.

Located inside the old Pedro G. Goyco School, the Taller Comunidad La Goyco is a community cultural center dedicated to the creation of programs, initiatives and opportunities for area residents while celebrating the street’s and the city’s rich history and culture. The center holds such programs as “Jazz Sundays,” “Movie Sundays,” health fairs and music workshops. The organization has also hosted COVID-19 testing and the distribution of masks during the pandemic as well as conversations with all the candidates for Mayor of San Juan, virtual music workshops and concerts (featuring the likes of award-winning saxophonist Miguel Zenón and drummer Henry Cole), and literary chats. The center recently served as the backdrop for Dominican rocker Rita Indiana’s epic music video “Mandinga Times.”

“We are proud to partner with the Taller Comunidad La Goyco for this special event. We share a similar cultural and civic mission and a common interest in empowering our communities through the arts while addressing some of their most urgent needs,” said Torres-Kortright. “Two years ago we invited Tito Matos, one of the Taller’s founders, and his Máquina Insular to perform at SRBCC and at UIC’s 24th Annual Pa’lante Conference in Chicago as part of our efforts to support Puerto Rico’s arts community in the aftermath of Hurricane María. As a musician, as a torchbearer for plena music and as a community activist, Tito is a role model for us.

“Kily will be joined by la creme de la creme of Mayagüez’s bomba tradition, including some of the genre’s top female performers, among them Ángela Vázquez, Bárbara Pérez and Mariela Mendoza. He will also be joined by Leró Martínez, who by now has become a fixture of Chicago’s bomba and plena scene with his performances at the Puerto Rican People’s Parade and Chicago Summerdance, among other local venues and events,” he added.

A plena maestro who has performed alongside Eddie Palmieri, Ricky Martin and Gloria Estefan, Héctor “Tito” Matos is one of the leaders of a movement that, in the last decade, has revitalized this genre in the island through his celebrated group Viento de Agua and now through La Máquina Insular. Featuring the traditional instrumentation of tambourines, güiro, tumbadora and the back-up of a clarinet, La Máquina Insular plays a repertoire of classic and new plenas with the strength and rhythm typical of the best of the genre.

Kily Vializ is a bomba and plena musician and cultural activist from the Western municipality of Mayagüez, Puerto Rico, where the Puerto Rican bomba. Vializ writes and performs his own material. Early this year, he released his first record, Boricua y de Mayagüez, thanks to a series of grants from the National Association of Latino Arts and Culture, Cultura Plenera and the Flamboyán Foundation.

While this special event is free, for those who wish to continue supporting this type of programming, SRBCC has launched a Patreon account to raise funds for its diverse virtual arts and community initiatives as the city and the country battle COVID-19. SRBCC’s donation-based carefully-curated series of virtual performances, classes, podcasts, and workshops are designed to keep local artists and youth working in visible and meaningful ways while providing artists with resources to bring their projects to fruition. To donate, visit https://www.patreon.com/srbcc.